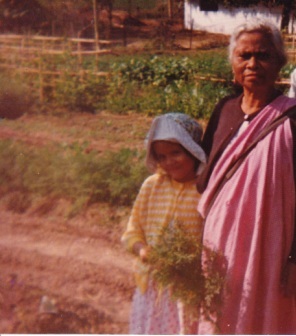 I heard my first stories from a woman who couldn’t read or write.

A small, stout lady with a soft, full moon face ringed by silver tresses. Dark once, always worn in a bun, fat, plump, perched on the back of her head like a dinner roll. The colour of her hair might be the only thing that’s changed dramatically over the years; her face, as far as I can remember, has always been intensely lined. A coastal shelf of experience.

My nanny (‘kong’ in Khasi), Stian Kharwar, or lovingly called Oiñ, has been with, or rather, a part of, our family for almost forty years. She is from Mawkyrwat, a town in the southwest of Meghalaya, about fifty kilometres outside Shillong. Once, she confided in us, she nearly chucked a cauldron of boiling water on her violent, abusive husband who was lying inebriated on the bed.

‘And?’ we asked, holding our breath.

She shrugged her tiny shoulders. ‘He wasn’t worth the trouble.’

So she packed up her things and children, and left instead. Joining, on her travels, a Punjabi family with a young son who she helped bring up. A few years later, through a common acquaintance, she was recommended to my parents, posted at the time at Koomsong, in Upper Assam. The story goes that my perpetually cranky three-month-old elder sister stopped crying as soon as she lay in Oin’s arms, and my exhausted mother hired her on the spot.

Soon enough, I came along, and Oin’s patient love awaited me too. Despite growing up amidst my father’s frequent transfers from one estate to another, I consider Harchurah my longest-lasting ‘home’, brimming with childhood memories. Located about an hour from the (then) small town of Tezpur. We lived in a bungalow perched on a section of high ground that overlooked a vast spread of paddy fields, visited occasionally by herds of elephants and rhinoceros. The garden was my playground—gigantic red-blossom gulmahurs, a sand-pit, bird bath (which I dutifully replenished daily), a grove of carambola trees, a lichee tree by the swimming pool whose summer fruit-laden branches would sweep the surface of the water, rows of spectacular papery bougainvillea. Oiñ had her own little house by the back gate, and I’d visit her there, pestering her for stories and chicken curry.

‘Her food is better,’ I’d reply (with the candidness of youth) when my mother enquired about my routine absence from the dining table. In truth, it was. The curry made in its simplest, most fuss-free form, generously ladled over a mound of steaming rice. We’d eat, I remember, with our hands. And then lie on the bed, the afternoon heavy and muggy around us.

‘Tell me that story, Oiñ,’ I’d say, ‘the one about nongshohnoh.’ The Khasi version of the bogeyman. Or, more often, about the ghost.

‘The one that saved me.’

‘When you were very small…’

‘How small?’ I’d ask, although I already knew.

‘When you were less than a year old, you fell ill, with a fever. But your parents and sister were away in Cherrapunjee, to attend your great-grandfather’s funeral. You were on the bed, and I was dozing on the chair…I don’t know if it was a dream, but a woman in a black jaiñsem stood at the door and asked for you…Give her to me, give her to me, she said…’

‘And then?’ This was my favourite part.

‘And then I saw your great-grandfather, he crossed the room…he was a doctor, you know…and when I woke up and checked you, your fever was gone.’

I’d shiver, with fear and excitement. Clutching at my personal sliver of magic realism. This was how Oiñ narrated her stories, unabashedly poised between the mundane and fantastic, fact and memory—what transmuted, years later, into Boats on Land. Looking back now, I see she gifted me orality, a life-long reminder that stories exist far beyond text and pages. That they are there for the taking, ready to be rediscovered, retold through my own voice. My interest in forms of story-telling lead me from the spoken to myth, our most ancient, iconic forms of making sense of the world. How they offer us the precision of behavioural patterns, an atavistic map of human nature, changeable, and constant, as the sea.

She also imbedded in me a mild, irrational fear of ladies in black jaiñsems.

Sometimes, when I’d been especially naughty as a child—bringing a goat into my bedroom concerned it might be cold outside; on other occasions, a calf, or a favourite chicken—she’d mutter menacingly, ‘I should have listened to that woman.’

Oiñ was a bit of a troublemaker herself. Like many Khasis, she’s particularly fond of ‘khana’ or telling stories, and not just the harmless, childish kind. Tea estates are compact, self-contained worlds punctured routinely by gossip and rumour, which Oiñ did well to generously spread and gather. Strolling around the place, in her chequered jaiñkyrshah, collecting scandal that she’d pocket like coins for her purse. She considered our cook, fondly called ‘Babarchi’, her real-life ‘frenemy’—sometimes confidante, more often bête noire—until my mother would intervene.

‘No more of this, Oiñ,’ she’d say, her chides rapidly turning to pleas.

And Oiñ would turn wide, wounded eyes toward her, proclaiming irrefutable innocence.

Often, though, we were partners in mischief.

‘Do your holiday homework,’ I’d be instructed, before my parents left for a party. As soon as they were out the door, I’d flick the television on with Oiñ’s enthusiastic approval. Doordarshan (apart from Chitrahaar) was usually deemed boring, but we owned a single Hindi movie VHS tape, that we’d happily watch infinitely. I remember little from Aradhana (1969) apart from the “Mere sapno ki rani” song sequence—with Rajesh Khanna in a jeep following Sharmila Tagore aboard the toy train winding up to Darjeeling—and Oiñ gleefully chortling during the fight scenes.

My favourite memory of Oiñ from those days was when my sister taught her to read and write Khasi. I remember her lined notebooks, the patiently rendered alphabet—it amazed me, all of seven, that a grown-up found them as exhilarating and infuriating as I did. She’d follow, with a finger, the lines in poetry and ‘khana’ texts my parents bought her, slim volumes printed by Ri Khasi Press in Shillong. Soon, she could read the Bible. She would write us letters while we were away in school. In English, she knew how to say ‘I love you’, and insisted she didn’t need to know more. When I visited her recently in Mawkyrwat, I found, beside photographs of my sister and I, these books, untouched now because the doctors advised against the operation that would remove the cataract slowly impairing her sight. She’d sounded forlorn on the phone—‘When will you come? My legs are no good’—but was overjoyed and feisty when we met.

‘Do you go to church?’ she asked sternly.

Where she lives, she is surrounded by a gaggle of grandchildren, grand nephews and nieces, little children running in and out of the lime-washed rooms. I hope they too listen to her stories. Before we left, I hugged her tight, and said, in response to her utterance, ‘I love you too.’ All the words I need to know came from her. One Reply to “The Gift of Stories”