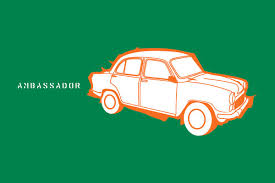 “how sad and bad and mad it was – but then, how it was sweet” ― Robert Browning

With the news that Hindustan Motors (HM) has suspended production of the Ambassador, India heaved a collective nostalgic sigh. After all, this mightily rotund tank of a car has been around forever (1957 is forever), taking up much space on our mostly narrow, potholed roads. And for those of us old enough to remember our pre-liberalisation days, the beloved ‘Amby’ is slotted with Things From Childhood — NP chewing gum, Chitrahaar, Disney Hour, VHS Tapes, Tinkle comics, Bournvita, Thums Up. Items endowed with mystical weight, bearing the insignia of youth, of sepia-tinted memory, of simpler, more innocent times. Naturally, we feel a tug of loss.

Pragmatists will point out the inevitability of the situation, of course. The Amby’s a fuel-guzzling monster, they’ll say, with high maintenance costs and little technological and design changes over the decades. What chance does it stand against the infinitely snazzier vehicular options of today? Look at the odds: ‘Aggressive appearance with Furia design philosophy’ versus ‘chubby’. (I’m tempted to buy a fat Ambassador, so in a few years, when it turns into a collector’s item, I can sweep grandly past these ‘philosophical Furia’ cars, and chortle wickedly.) Or there’s ‘New facia with larger kidney grille, sporty front bumpers and Xenon headlights’ versus ‘stays intact, mostly’.

And yet, and yet, as Proust reminds us, remembrance of things past is not necessarily the remembrance of things as they were. So while I may not be able to tell you the price of fuel in 1988, I recall clambering into the Amby and feeling as though I was stepping into a ship. While I probably didn’t change a tyre, or tinker with the engine, I remember my cousins and I sitting atop my Uncle Darryl’s grey ambassador, playing pirates. (Until we dented the curved ceiling almost all the way through. Let’s just say he wasn’t pleased.)

My dad owned a string of Ambassadors, from 1978 to 1989—leaf green, off white, grey, and blue—and I suppose the reason I’m exceptionally fond of the rickety thing is because, for a few years, it was my vehicle of escape. Yes, I know what you’re thinking, not quite the sleek, streamlined conveyance that the term brings to mind. Yet every winter holiday (in Shillong, three endless months), my mum and dad would pick up my sister and I from our grandparents’ place, and we’d drive to a tea estate in Assam. And if you have the slightest idea of what the roads were like in that part of the world in those days (nay, even now), you’d know the humble Ambassador is a thing of miracles. Roads like river beds, and the Amby, if not quite sailing across, then definitely staying intact, bouncing along on ridiculously resilient suspension. Roomy enough for two restless children, picnic baskets, must-have toys, Bata chappals lost forever under the seats, and once, even a box of pet rabbits.

I think my sadness is deepened also because HM’s announcement comes at a time that confers it with a sense of the prophetic. What’s threatened is not just a clattering factory somewhere in West Bengal, but a worldview that also cherishes the homemade, the local, the domestic. That looks for ways to stem the onslaught of capitalistic consumerism. That seeks alternatives.  This is about so much more than just  a car.

Admittedly I haven’t gathered a vast number of Amby memories; by the time I was old enough in the 1990s, dad had switched to a Contessa (remember those?), and the Gypsy (These could cross river beds, I swear), and eventually something by Maruti. But, to pay a tribute, we rummaged through ancient albums and found photographs in which our old faithful stands aside like a beloved part of the family. In these images, my parents will always be young, my elder sister knee-high, my aunt and uncle forever twenty-something, my grandfather alive and smiling, donning his favourite flat cap, the Ambassador quietly gleaming in the sun. All living is loss, yet how much greater the depletion when the props of our memories also drop away.

I hope what HM say is true, that they’ve merely “suspended production”, and might return.

Until then, let’s raise a glass to our old friend.

*Please feel free to share your ‘Amby’ memories below*