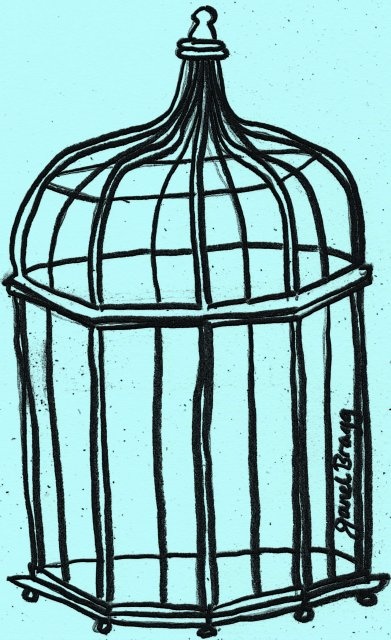 I left Delhi because X, my then boyfriend, and I were beaten up in Lado Sarai.

Only a handful of people know this, but there, I’ve said it. I never thought I would, but I have.

It’s been almost five years, and I can still remember the woman’s face. The woman who grabbed me by my hair, took off her slipper and beat me with it all across my back, my face, my legs. She was tall and strong and wearing a dark blue salwar.

In my head she is always wearing a dark blue salwar. She was much too strong for me to wrestle out of her grasp.

I was with a city magazine then, and out working on a story – a rather unexciting story that entailed visiting an art gallery in Lado Sarai and reviewing a show. X refused to let me go alone. He took me on his  motorcycle. In the neighbourhood’s labyrinthine streets, in the middle of a hot, dusty afternoon, we got lost.

At some point, we came to a latched gate that led out into the main road. I hopped off to open it, and a man strolled out a nearby building saying I shouldn’t do that. Politely, I explained where we needed to go, and assured him that I’d latch the gate again as soon as we passed through.

I persisted. This is a public road, I said.

I turned back to X and said, ‘Alright, fuck it…let’s go.’

The man thought I’d said ‘Fuck you’ to him and called me a name I wouldn’t like to repeat here. X, trying not to get angry, told him he shouldn’t say that. X was pushed. X pushed him back. Before we could catch a breath, we were surrounded. People poured out of doors and side gates. The tall, strong women began screaming at me, she raised her hand. Three or four men held X and began punching him in the stomach. I cannot describe it further. It was a scene that happened to me and outside me all at the same time.

We only got out of there alive, and somewhat in one piece, because X persistently shouted out an apology – ‘Sorry, sorry…we’re sorry. Let us go…We’re sorry.’ He had the good sense to do that, I didn’t. I was much too angry and scared.

Until this day, I don’t know why that happened.

Was it because we were a young couple out on our own? In ‘western’ clothes, together on a motorcycle? Was it because we spoke poor, broken Hindi, and were clearly, in so many ways, ‘outsiders’? Was it some sort of primeval territorial instinct on their part that we had trod on? Perhaps it was a combination of all these things, and other reasons I still cannot fathom.

But it happened. In Delhi. In a city where a young boy from Arunachal has just been beaten and killed.

Why is Delhi such a violent city? A city where violence is brewed and doled out on those it sees as weak or not of its own.

While these are terrifying incidents of physical abuse, I know that people from the ‘northeast’ fight daily battles. We find it difficult to rent a house. That most basic of necessities, of a home and shelter, turns into a frustrating, humiliating hunt. We’ve been told not to cook our strange, smelly food. To not throw parties. To not ‘come home drunk with boys.’

While I’ve made some of my closest friends in Delhi, and there, met lovely, bright, cultured folk, I’ve also been humiliated, time and again, and beaten. Yes, beaten. In every sense of the word.

A few weeks ago, over an email chat with a friend, I told her that my husband and I were thinking of moving to Bangalore at the end of the year.

‘Why Bangalore?’ she asked. ‘Come to Delhi!’

I thought long and hard about my reply.

I wrote that while I love my visits there, to meet friends, check out art shows, lounge at Lodhi, I wasn’t ‘mentally prepared to move back.’

I don’t know if I ever will be. In my head, that lady still looms large. The lady in a blue salwar.

While the candlelit vigils and the tragic protests take place for Nido Taniam today, I thought I was done with silence. Violence – whether in Delhi against ‘outsiders’ or in the northeast against ‘dkhars’ – is condemnable.

I don’t know why I didn’t want to speak of this incident earlier – a close friend, who is also a journalist, said I should have contacted the press then, reported it to the media. Yet I didn’t, I suppose, for many reasons. I didn’t want to worry my family. A part of me wanted to pretend it had never happened. It was humiliating. Embarrassing.

The strangest thing is, I think I also felt a certain amount of guilt – that somehow, I had trespassed. That I was in a place where I shouldn’t have been. In situations like these, the gulf between ‘local’ and ‘outsider’ is wide and tangible. You run away to stay alive.

I have never returned to Lado Sarai.

Another close friend said I should. That he would take me there. So I could face the place, and it would stop being what it is in my head. I am yet to take him up on his offer. I’d like to begin with sharing, and acknowledging. Perhaps then there can be room for healing.

* Amidst all the love, support and compassion, there have been some unsettling comments regarding the treatment of non-tribals in the northeast, implying that somehow ‘what goes around, comes around’. I wrote this piece spurred by the news of Nido’s death and the overwhelming mix of emotions it brought up. My intention was not to deny other people’s experiences. I’m all too aware of how precarious things are on the other side, of how non-tribals/dkhars/’outsiders’ might feel unsafe and unaccepted in some parts of the northeast, or rather – since this is the place I know well – in Shillong, my hometown.

Yet, an implication of collective responsibility is also terrible and dangerous. As Louie points out (below), the North-Easterners being abused in Delhi are not the same ones perpetrating the violence on non-tribals in the North East (both forms of violence deserving equal condemnation). Damning them because they happen to come from the same place makes no sense. What goes around never comes around to the perpetrators of violence – it comes around to people like X, or Nodi, or you and I, who happen to be in the wrong place at the wrong time.

69 Replies to “The Place I Cannot Call Home”